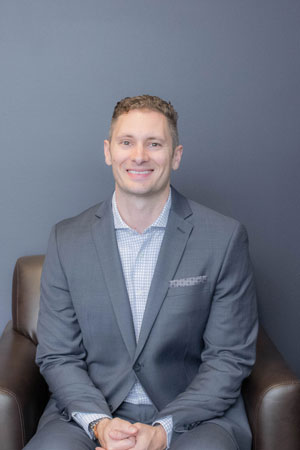 Dr. Rustin Schreiner's Mission Statement is to help as many people as possible achieve optimal health and quality of life through chiropractic care. Dr. Schreiner’s interest in chiropractic began at a young age when he began suffering from severe back pain. He often found himself asking, “Why does my back hurt so badly every time I reach down? Why would a healthy 15 year old be having these problems?” It seemed nobody had the answers to these questions. The solution from the medical community was to try more medication, instead of asking the real question of: what is causing this pain? That’s when Dr. Schreiner sought help and received it from an unexpected source. A skeptic at first, his family made an appointment to see a chiropractor. With low expectations he went in for his first appointment. The doctor came in and asked a series of questions, and then put his hand on exactly where he was having the pain.

After examining the rest of the spine and taking xrays, he was told to come back the next day where he received his first adjustment. One visit and he was convinced!! Dr. Schreiner had immediate relief; he was very excited to be normal again. It wasn’t until a few weeks later of being under frequent chiropractic care that he said to himself, “I haven’t had any headaches!” This is something he now gets to hear from patients daily. Dr. Schreiner was lucky enough to have his chiropractor explain the difference between treating symptoms and fixing the cause of the problem. He didn’t know it then, but this shift in philosophy would change his life! It was this experience that led him to become a chiropractor. After working in a few chiropractic clinics and getting his prerequisites required he attended Life Chiropractic College West in Hayward, California. It, as it turns out, was one of the best decisions he had ever made.

Dr. Schreiner chose the school because it was different. Its entire curriculum was focused on FINDING the CAUSE of the problem and FIXING that, instead of treating symptoms. It was the most handson of any Chiropractic College, which taught him the best way to take care of each individual. It was here that he became passionate about Wellness and Prevention, and began to realize that his requirement as a chiropractor went further than fixing the nervous system, but ensuring that his patients stayed healthy for the rest of their lives. He continues learning and completed a CDC ACSM CEC Certification on Concussions. Dr. Schreiner also has Advanced Certification In Whiplash And Traumatology.  Dr. Schreiner also became Certified in Myovision DynaROM which is used for assessing those who have sustained a work or Motor Vehicle injury. Dr. Schreiner stays active enjoying hiking, traveling, and playing basketball. He is also a huge Seattle sports fan and attends Seahawks games with family and friends. As his philosophy is rooted in prevention and reaching optimum health, he works out daily, and participates in sports believing it is best to live a healthy lifestyle and be an example to his patients and gets adjusted regularly to ensure proper nervous system health and optimal function. Staying active helps him stay young and feel healthy, and helps him continue to bring passion for wellness into the office.

We look forward to hearing from you